Goop is just a nickname given by those who've lived through an encounter with these most dangerous gelatinous lifeform. Lacking in intelligence, Goop thrive mainly due to their quick spawn rate, using their numbers to overwhelm and swarm on their prey. Poisonous to the touch, they are quick to subdue their victims with a viscious lunge/chomp. Those unlucky enough to evade these abominations will be consumed out right; the Goop leaving behind unwanted materials such as bones and teeth. 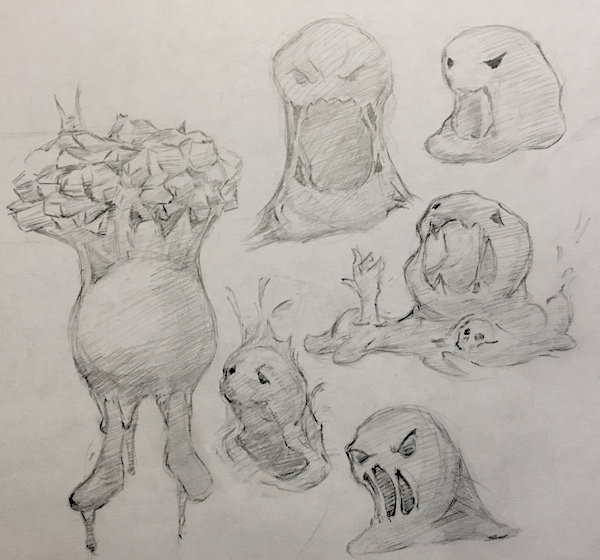 Goop can be found all over the Mobius System. Nobody really knows which planet they originated from, only that they are numerous and have been able to somehow succeed in inter-planet travel. Some hypothesize they will sneak onto cargo ships, and thus inadvertently end up on another planet. Since they can survive in space for a considerable amount of time, you can sometimes find them orbiting planets.

Goop will travel along walls until they meet an obstacle, where they will then choose another path to pursue. Their vision isn't great and will only attack an unsuspecting passerby if they are within reasonable range.

Goop will use their entire body to lunge forward upon prey. Their posionous touch can do considerable damage, as well.

These creatures will normally drop some goo, which has been found to be a very useful adhesive. Those lucky enough to kill a Goop without damaging it's eyes can reap it's rare reward of an extremely mallable crystal.